REIBC Event - Translink of the Future: Moving in a Growing Region

Translink of the Future: Moving in a Growing Region

Join us for an enlightening conversation with Kevin Desmond, CEO of Translink. Kevin will give us an overview of recent Translink priorities and initiatives and Mr. David Podmore, RI will join him to dive deeper into the major transit infrastructure projects. A conversation you won't want to miss!

Kevin is an experienced executive with a career built in the public transportation industry. As CEO of TransLink, Metro Vancouver’s transportation authority that moves 500,000 people every day, he oversees planning, financing, and management of a region-wide multimodal transit network that includes bus, SkyTrain, SeaBus, HandyDART and West Coast Express, with 7,800 employees. Under Kevin’s leadership, ridership in Metro Vancouver has grown 18 per cent since 2016, faster than any other major metropolitan region in Canada or the United States. Since 2016 he has helped secure more than $9 billion investment, the largest transit and transportation investment in the province’s history. Funding will contribute to major region-wide transit and transportation expansion, including the construction of two new rapid transit projects in two of the region’s largest cities.

Prior to TransLink, he served as General Manager of King County Metro in the Seattle metropolitan region for more than a decade where he delivered the ORCA fare program, several bus rapid transit lines, and launched Seattle’s light rail and streetcar service – all contributing to a 44 per cent ridership increase. Prior to King County Metro, Kevin was Vice President of Operations and Development at Pierce Transit in Tacoma, Washington. Before relocating to the West Coast, Kevin acted as Chief of Operations Planning for New York City Transit.

Kevin has pioneered an array of operational, fleet, technology and market development initiatives over the years and has a long-standing commitment to progressive environmental policies and investments. Sustainability has been a major priority for Kevin throughout his career and continues in his drive to reduce TransLink’s carbon footprint, from converting to a more sustainable fleet to upgrading facilities. He has led TransLink to become the first public transit authority in Canada to sell carbon credits, and was the first Chair of the American Public Transportation Association’s Sustainability Committee.

Widely recognized as one of Vancouver’s most influential contributors to the real estate industry, David Podmore has been in the business for more than 40 years. David brought years of planning and development experience to the table when he co-founded Concert with Jack Poole in 1989. Today, David serves as Chairman of Concert Real Estate Corporation and Chairman and CEO of Concert Infrastructure Ltd.

David is often recognized for his tireless efforts to give back to the community. David currently serves on the Board of LifeLabs and has served as Chair of FortisBC and is Past Chair of BC Children’s Hospital Foundation. David has also served as Chair of the BC Pavilion Corporation, Chair of the British Columbia Institute of Technology (BCIT) Foundation, President of Urban Development Institute (Pacific Region), President of the Greater Vancouver Home Builders Association, and spent eight years as a director of the Canadian Tourism Commission.

He is a recipient of the Queen Elizabeth II Diamond Jubilee Medal, and in 2014 was invested to the Order of British Columbia. In 2016 David received the Rix Award for Engaged Community and Corporate Citizenship.  David is also an RI and received the REIBC Award of Excellence in 2002. 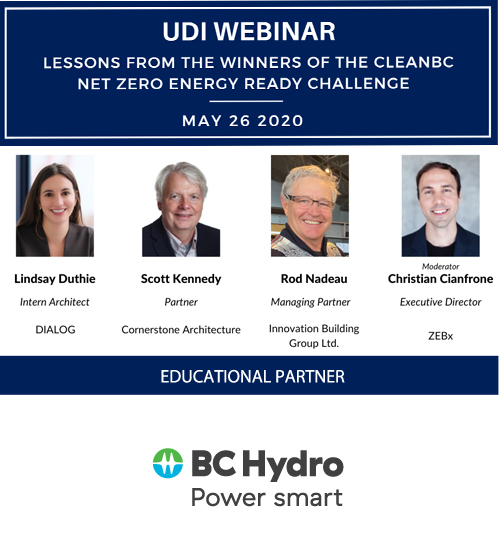 The Net-Zero Energy-Ready Challenge is a provincial incentive program and juried competition designed to support, promote, and celebrate the design... END_OF_DOCUMENT_TOKEN_TO_BE_REPLACED

Sit Down for A Casual Chat About Where We've Been, Where We Are and Where We Are Going Join Anne... END_OF_DOCUMENT_TOKEN_TO_BE_REPLACED

Don't miss out on this opportunity to learn how green building regulations have changed in the past year and a... END_OF_DOCUMENT_TOKEN_TO_BE_REPLACED